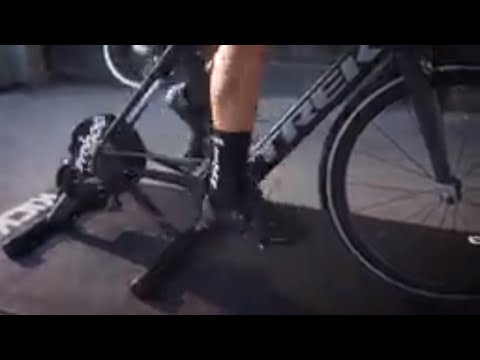 Item may have been used as Demo or Display model. Manufacturer warranty is still valid.

The success of the top shelf KICKR Power Trainer and the KICKR SNAP positioned Wahoo at the two ends of market in the smart trainer spectrum. With the release of the KICKR CORE a middle option is here and while there are some important (though not crucial to most) differences between the topline KICKR and the CORE, the CORE sits above it's direct competitors with overall and Wahoo ecosystem capability, and in trainer noise produced. Like the 2018 release of the KICKR, the CORE uses a belt system that is pretty close to silent, as the noise you can actually hear comes just from your drivetrain at any speed or power output.

At the $300 difference in price from the KICKR, the CORE offers essentially the same technical capabilities, connection systems, controls, 3rd part app integration, and KICKR family (ELEMNT, CLIMB, HEADWIND) shared systems. The max power output rating drops from 2200w to 1800w, which is still a huge output for top pro sprinters. The flywheel is four pounds lighter at 12lbs, which is not really noticeable- in part due to the drive belt system. The CORE does not come with a cassette, has a different base/leg system, and requires installation of the legs. The topline KICKR comes with a cassette, is complete out of the box and has adjustable height legs, which the CORE does not. We have to admit, the KICKR looks cooler, and potentially for physically larger, more powerful cyclists who do a lot of sprint work indoors, may be more stable and accurate at massive power levels.

The pace of change is incredibly fast within the tech world, and Wahoo has separated themselves with excellent customer support and interaction, rapid firmware upgrades, and a dedication to building both hardware and software worlds at a faster rate, with increasingly useful and usable integration. Don't discount that last aspect, but the real focus has been on continually improving the physical deliverables of the training experience- higher power capability, increased maximum grade, noise reduction and the ole' reliable trainer conundrum- a better road feel and more realistic experience that the options of the KICKR CLIMB and HEADWIND (sold separately) will only enhance.

Making a trainer that has no obvious mechanical sound has been a journey for Wahoo. The 2018 release of the KICKR and KICKR CORE features physical redesign of the actual belt and flywheel interface that drives the unit, resulting in making it the quietest trainer drive system we have ever not heard. The flywheel and freewheel interface still makes some noise when you stop pedaling, but even that is a massive improvement, and the only other noise you hear is your bike's drivetrain and your heavy breathing, all of which gets drowned out by your average fan anyway. The unit also has very little vibrational frequency to it, and using a decent trainer mat will mitigate that.

Accuracy of the CORE is rated at +/- 2%, which is consistent with the KICKR. The physical drive changes also improve the reactive power curve, so if you create a huge power jump, through an interval or sprint the unit will react faster, more like being on the road. A 1800 max output is a number few will touch, but the ability to hold and consistently deliver proper outputs when under erg or app control is impressive. The reverse process- of the descending power curve also holds true, feeling much more natural. You'll have to "settle" for a 16% ascent grade. Like the KICKR, the CORE was built so that the hub and rear dropout can rotate freely without friction or wear as the CLIMB unit moves up and down, eliminating any possibility of frame damage. From an ease of use perspective, the placement of two LED indicators on the CORE's housing reflect Bluetooth and/or ANT+ connectivity, making pairing and awareness of an active pairing clear to the user. This was a change truly driven by user feedback, and welcome one.

Wahoo makes the claim that no trainer supports more apps, from virtual structured rides and workouts from providers like Zwift, TrainerRoad, KinoMap, BKool, Wahoo Fitness App, and much more. Connectivity is covered with Bluetooth Smart, ANT+, and ANT+ FE-C, the last of which allows the trainer to be manually or automatically controlled from any FE-C enabled device or application, most notably via most of the key Garmin head units. The CORE measures and transmits speed, distance, power, and cadence to your app or head unit. Wahoo also has third party support for applicable power meters and popular training apps.

Although the base and legs are totally different then the KICKR, and it has no true carry handle, the CORE is very easy to manage, move and store. The CORE maintains the requirement for AC power. It has a Shimano/SRAM 11 freehub- right now there is no Campagnolo freehub/hub option. The CORE is 130 & 135 mm QR compatible and offers 12/142 and 12/148mm thru-axle conversion.

The CORE is a smart move by Wahoo, expanding their overall market, though it's own topline KICKR sales may suffer a little. Wahoo's strong commitment to making the KICKR-series platform the most accessible option for third party devices, apps, and controls, make Wahoo a favorite trainer option of most Excel staff members and many of our customers. We feel the CORE will become a top seller, though we know the KICKR itself will remain ascendant as well. Feel free to give us a call at (800)627-6664 and we'll set you up with the best KICKR series trainer for your needs and introduce you to the rest of the Wahoo KICKR universe.