Offer valid for 10% off qualifying items.

Is it time for you to advance your performance while pushing for true event results? if you have worked diligently to get the most out of your multi-sport experience, it is time for a bike that matches that effort with wireless shifting technology and superior aerodynamics you can exploit. For 2020 Cervelo has evolved their P-series bikes with new frame design and complete build packages that enhance aerodynamics, improve drivetrain efficiency and overall torsional resistance from the headtube back through the frame. Gone is the P3 designation, with that frame level simply becoming the P-Series. Built here as a fully capable event bike, this new triathlon/aero package demonstrates significant improvements over the P3, with an Force AXS 1x12 drivetrain build featuring full eTap AXS wireless shifting and excellent SRAM hydraulic disc braking system as well as a and Vision 55TC (XDR) Disc brake wheelset. The build includes aero storage and hydration accessories that help to reduce drag while offering simplicity and convenience as part of this impressive complete package.

Cervelo created the all new P-Series for a single mission: to go from Point A to Point B as quick possible. The P-Series is a no-nonsense speed machine engineered for pure, nonsensical fastness. The engineers went back to the drawing board of the P3, improving every facet. How? Start with torsional frame stiffness. The P-Series frameset is 18% stiffer at BB than P3. Headtube and general tube refinement from dropout to dropout combine with that BBright Asymmetric bottom bracket zone and the result is a borderline ridiculous 30% improvement in overall torsional stiffness. The P3 has been one of the most decorated framesets in the triathlon world, so to see such massive improvements is wholly impressive, and we haven't even mentioned that the P-Series frame is 9% lighter, or examined aerodynamics yet.

A quick look at the P3 and P-Series designs allows the viewer to see the similarities, but a closer look demonstrates the aerodynamic refinements that deliver impressive results. Clearly Cervelo has also been able to develop a new carbon lay-up to deliver the impressive stiffness and lighter weight, but those are generally internal. Aerodynamic changes can be very subtle but seen in three areas; frontal shapes, transitions from tube to tube and juncture to juncture, with the third being the integration of components and aero accessories- all taken together with proven wind tunnel and CFD testing, but also with respect to how the rider position and physical interaction impact the true overall aerodynamic picture. Cervelo has tested the P-Series at 26g faster than P3 bare, and 18g faster loaded.

There are some key points to mention. While the frame cable routing system is fully internal, and mostly integrated, Cervelo made a strategic decision to allow for the use of any standard stem, allowing for easier service, fit adjustments, and lower cost. The frame itself represents the deep history of Cervelo's engineering: the integrated tapered fork system, headtube, Dropped Downtube system, and the sculpted Extended Seattube Cutout that shields the rear wheel, the BBright concept. In addition to the continued development of those engineering feats, Cervelo modified the frame geometry as well to allow for increased stack and reach range. Where many will appreciate the infinite attention to detail is the coordinated storage and hydration features of the P-Series. The toptube Smartpack 400 bag system fills in perfectly behind the sleek cable routing entry, offering small item storage that is easily accessible while riding. The Aerobottle 500 sits flush against the downtube, blending into the seattube at the bottom bracket, with a shape that carries and guides are cleanly off the back. The massively adjustable aero carbon seatpost now has a mount off the back for a rear bottle mount. All of these features and selections are part of the full aero package. 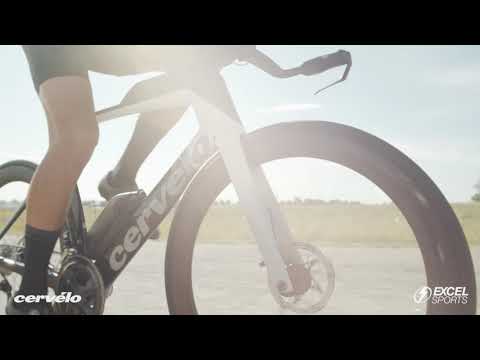